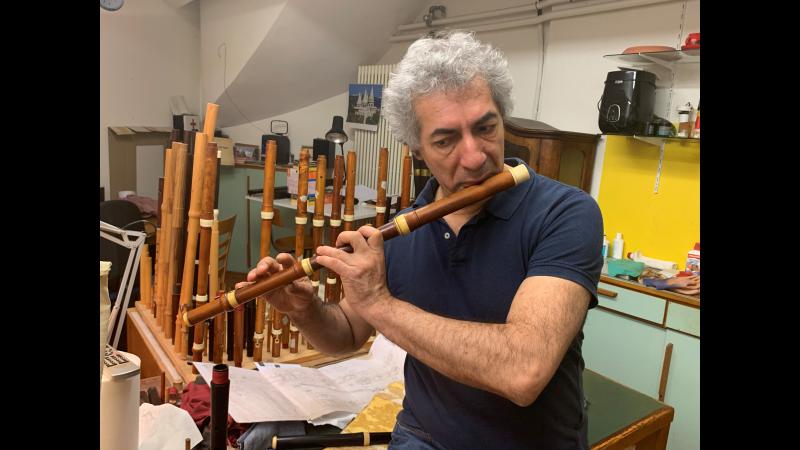 In 2015 an ancient flute was bought on eBay from a young German flautist.

It was an exceptional discovery: to this day, it’s still the first and only instrument to have been attributed to the most important flautist of the early 18th Century, Pierre-Gabriel Buffardin, and the first flute at the court of Dresda from 1716 to 1748.

Today we know that “LE FILS”, displayed on the brand, is a reference to Pierre-Gabriel’s father, Jean-Joseph, who is described on his will as a “manufacturer of wind instruments in Avignon”. Therefore it’s a tribute from Pierre-Gabriel, LE FILS, to his father.

I was given the flute to go over it and make a copy of it.

Even if it went through various changes over time, like the shortening of the upper body, its deformation, and an alteration of the mouthpiece, its quality was still excellent. I immediately understood how this flute, given its special characteristics, represented something new.

The making of the copy lasted for two years of studies and work.

My goal was set in compliance with the peculiar features of the instrument and in consideration of Buffardin’s original work.

Finally, in October  2017 I achieved what I had in mind and the final result was exceptional!

Not only for the realization but also for the understanding of the original flute.

In fact, the reconstruction of the upper body allows the original flute to make you understand all its special features of sound and intonation.

The flute, in its most complete version, offers:

The difference between the two 415s lies in the way they sound, brighter and clearer with the original head, warmer and more immersive with the shorter one.

The flute sounds great with every single one of its bodies: it’s like playing four different flutes! Many of the most important flautists have bought this flute.